If you asked me what those flying things are outside, I'd have said birds for my whole life up until the last 18 months.  A bird is a bird, Some birds are big some are small some are different colors and I know they have names but to me they were all birds.  18 months ago my boys wanted to learn more about specific birds and we started getting books out of the library, paying more attention on nature walks and asking more questions of birders.

As a child I spent lots of time in the woods and summers at girls scout camp in the woods, you'd think in all that time in nature I would notice these beautifully colored birds.  You'd think I would have seen the red of a cardinal, the bright blue and very loud call of a blue jay and the glowing yellow of the small quick goldfinch.  All my childhood and young adulthood I am sure I must of seen these birds, I can now see they are everywhere, but somehow I missed them.

Now I look out my window and daily see a beautiful male and female goldfinch eating the seeds from our sunflowers. They are beautiful! I have had the chance to share these sightings with both family and friends from the brown couch in our living room making it even more beautiful and amazing- a shared experience.  The goldfinch perches on the top of the sunflower ducking its head down and pecking out a seed, eating it, and repeats.  It will sit there at work on its food for many minutes allowing us to watch and enjoy.  On a recent walk with my in-laws we saw one on a thistle doing the same thing, that is the picture you see below. 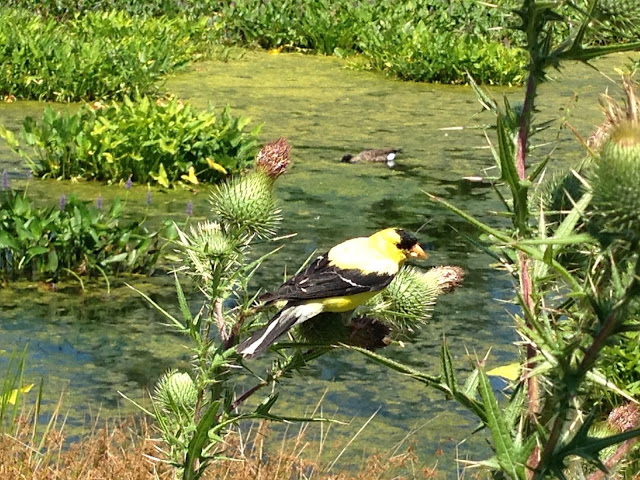 A few weeks ago the boys and I went for a walk down a bike path near our house.  It was a rainy day and I knew we needed to get out of the house for some exercise.  We donned our raincoats and headed out.  I was distracted and thinking about other things and ignoring the natural world around me until I spotted a bright red cardinal.  At the sight of this bright red beauty I was immediately drawn into his world.  I noticed there were other cardinals around, two females with much duller colored coats on two different trees.  The male was calling to them, chasing them and flying away again.  It was a whole soap opera in the bird world.  It had nothing to do with us they had their own world going on and I could have walked by and missed it all.  They went on and on and eventually the boys pulled me away into something else but the whole interaction struck me--there is so much more going on that I so often miss.

In both of the last two houses we have lived in we have had blue jays that like to perch on the roof of our neighbors house and call (VERY LOUD) for a girl blue jay.  I can't imagine being that girl blue jay and responding to that.  At one point our oldest son decided to name one of the blue jays Ellis after a favorite singer/songwriter of ours Ellis Paul.  Some how, once the bird was named Ellis he became a friend and instead of being annoyed at the sound we would talk to him out the window- his Ellis, it's okay Ellis I am sure she will come soon, there is Ellis again!  He became fun and beautiful in his own right.

If not for my boys and their interest in birds I don't think I ever would have made homemade bird feeders out of milk cartons, filled them and watched birds for hours in our yard.  I don't think I would have noticed the bright red of the cardinal, known the soap opera of their mating rituals or befriended Ellis. I am sure I would not have sat with friends and watched the goldfinch at work.  They would have just been birds but now there is beauty, color, love, excitement and song.