A few days ago I was grumpy: the boys had made a huge mess of the house for the 945th time that day and we just did not seem to be getting anywhere.  I felt powerless to change the direction of the day and said more than once "you guys really need to learn to clean up".  As afternoon rolled around I had an idea.  I wanted to make a baby wrap for my 7 month old daughter and found some really nice material friends had given us years ago and tried to make it out of that.  It was not long enough so I cut it down the middle asking my 4 year old the hold it as I cut.  I sewed the ends together and, voila a baby wrap.  I watched a video of how to put her onto my back with it and FAILURE, it was still not long enough--it wasn't going to work.

I had wanted to learn to make something and was energized by actually working on it instead of thinking about it.  Instead of stopping there I looked up how to make a pouch sling.  I knew that would take less material and figured with a little help from the internet I could probably make one.  I found a site, followed the directions and about an hour later presto, I had made a sling and the baby even fits in it.  The best part is the grumpy mommy day turned around completely and mommy and children had a great rest of the day. 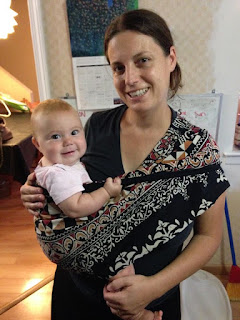 Why did using some material to make a sling turn my day around?

At first I thought it was because I produced a real thing from my own hands.  I think this is true. Making something with our hands that is a real thing is a big deal and for sure could turn a day around.  Actually, I am a super big proponent of handwork.  I could write a whole post about how important and life giving I think making things with your hands is.  I could show you pictures of knitting, baskets, and food I have made with my hands this year, and tell you how proud, excited and accomplished I feel about them.

But that is not all of what I think was going on with the sling.  I think that it was something even broader.  I learned how to do something I had not done before.  I got out of observing my grumpy day and feeling powerless to change it and instead of making my kids be different to solve the problem I took my focus off them and instead, learned how to do something myself.  As I started learning the boys were immediately engaged and wanted to help.  My 4 year old held the fabric while I cut and pushed the pedal on the sewing machine while I sewed.  My 8 year old helped as I first tried to launch the baby onto my back and looked impressed at the finished sling after he returned from a friend's house.  The baby actually played happily on the floor while I sewed after having a previously super fussy day (not sure whether to attribute that to my learning or not).  Our day turned around. I learned and they learned too.  The atmosphere of our home changed from one of parent and children at odds with each other to one of learning, joy, creativity, freedom and space for each other.

This, is why we call it Family LEARNING Adventure.  We think something magical happens in a family when they learn together.  We think as a culture learning has been given over to the schools, and workplaces and we want to bring that joy back into families.  Whether you work or stay home, send your kids to school or homeschool, there is always time with your family.  We invite you to take a family learning adventure this week.

Learn something together where you lead by learning then tell us about it, we want to hear how it goes.